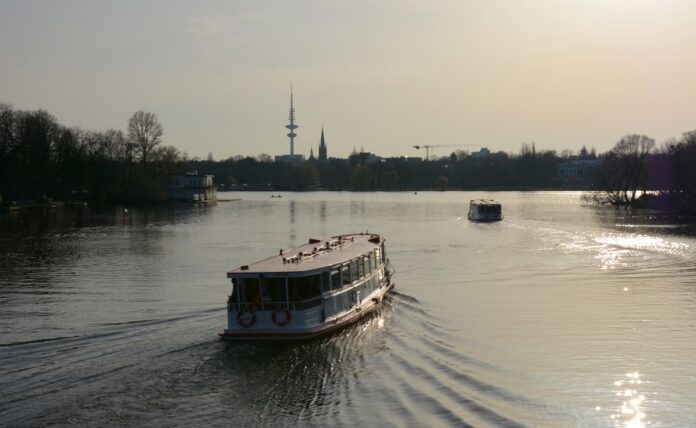 Alster is the place where Hamburg citizens and tourists can really relax. This is also where you can get a real Alsterwasser, which is beer with soda.

One of the things you should try in Hamburg is an Alster round trip, sightseeing tours on the water, with one of the many steamboats starting from the Jungfernstieg and sailing on the lake and canals from which you see Hamburg in a different perspective.

On the beautiful Jungfernstieg you board the white Alster steamship, which has been part of the cityscape since the early 1800s. In 1856, the Hamburg Senate granted a concession to the first shipping company.

From the Jungfernstieg it goes over the Binnenalster through the Lombardsbrücke and Kennedybrücke to the Aussenalster, which is a popular area for sailors, canoeists and rowers at all times of the year. From here you can see the distinctive facades of the luxury hotels Vier Jahreszeiten, Atlantic Hotel and Le Meridian which lie down to the lake. You sail past the popular cafes located on jetties to the water. Around Alster you see alternating green areas and the famous cafes such as Alsterperle and Café Bobby Reich.

The Krugkupplung bridge is the northernmost point of an Alster round trip, from here the boat sails back to the Binnenalster and the trip now passes beautiful parks and large white villas. The US Consulate General is one of the most beautiful buildings on the Alster. Further down is the oldest rowing club in Hamburg.